return back
Home
Blog
With embroidery on the body: why did I make a tattoo?

With embroidery on the body: why did I make a tattoo?

Recently, ukrainian symbolism has become even more popular. This was reflected in the field of such art as a tattoo - more and more "embroidered" drawings appear.

In this regard, the ETNODIM team decided to interview people with "embroidery" on the skin and acquaint you with this material.


All respondents were presented with a list of questions.
1. Name, profession, age, city.
2. Describe your tattoo, where is it?
3. How did the idea arise and why is it exactly?
4. Is there a embroidery shirt? If so, do you wear it and how often?
5. Did Euromaidan somehow influence the tattoo idea?
6. How do you see the future of Ukraine?


2. I have 4 tattoos. Trident on the back. World map on the left wrist. And a map of Ukraine and "embroidery" on the right hand. She has an 8-pointed star and diamonds. If you look closely, you can "read" in her the silhouette of a woman who raised two hands up. There are different interpretations of these signs. But for me, it's about the energy of life, female power. This is the slavic goddess Makosh. Perun's wife. Like Hera in ancient mythology. Patroness of fertility, success and happiness. 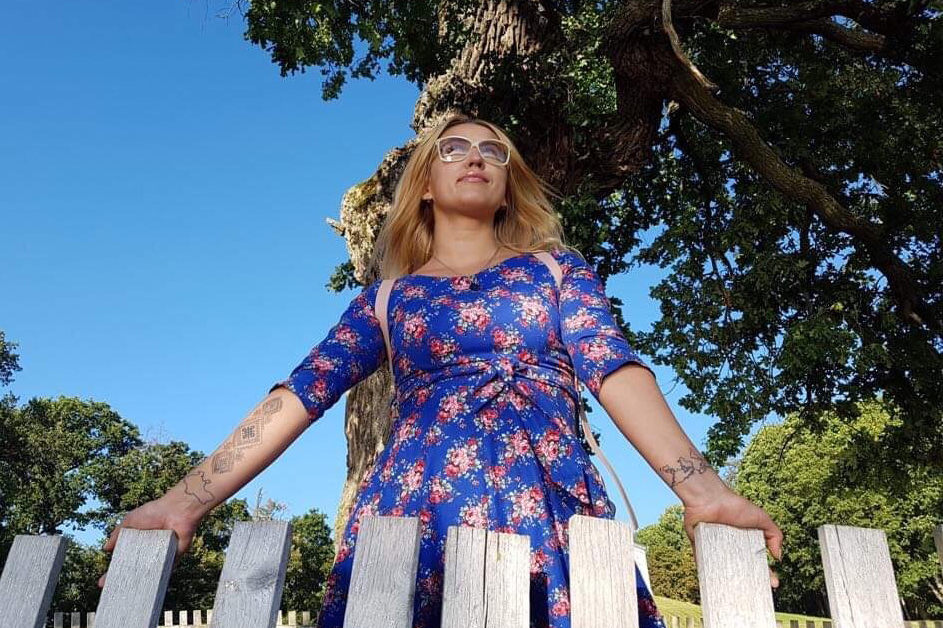 3. I made all the tattoos almost in one period. After the Revolution of Dignity. I have long wanted such a "decoration" for myself. And here it all came together. Rise of identity and citizenship. 4 years have passed and I like my tattoos more and more.
4. Embroidery is. By the way, from Etnodim. Black. But she is in my closet, like a must have. And a tattoo is an embroidery, which is always with me) This is my identifier. People see and understand my values ​​and worldview without words.
5. “But we have to do ours with you. Open your eyes and go on! And clenched teeth, mother gently love. Who else but brothers? !! "As Vakarchuk sings. We still need a lot of work. Above you first. And then, perhaps, our children will see this future bright.


2. The embroidery is stuffed on the left hand from the wrist to the elbow bend from the inside. Made in 31 years.
3. First there was the idea of ​​a pair of small crosses with thread and a needle, as if an embroidered embroidery was embroidered on my skin, but when I saw this sketch I just fell in love with it and I didn’t see another embroidery on myself, although it was half my hand.
4. Embroidery is. I wear on Independence Day, if I go for a walk in the city and on Vishivanka's day. I have it classic. 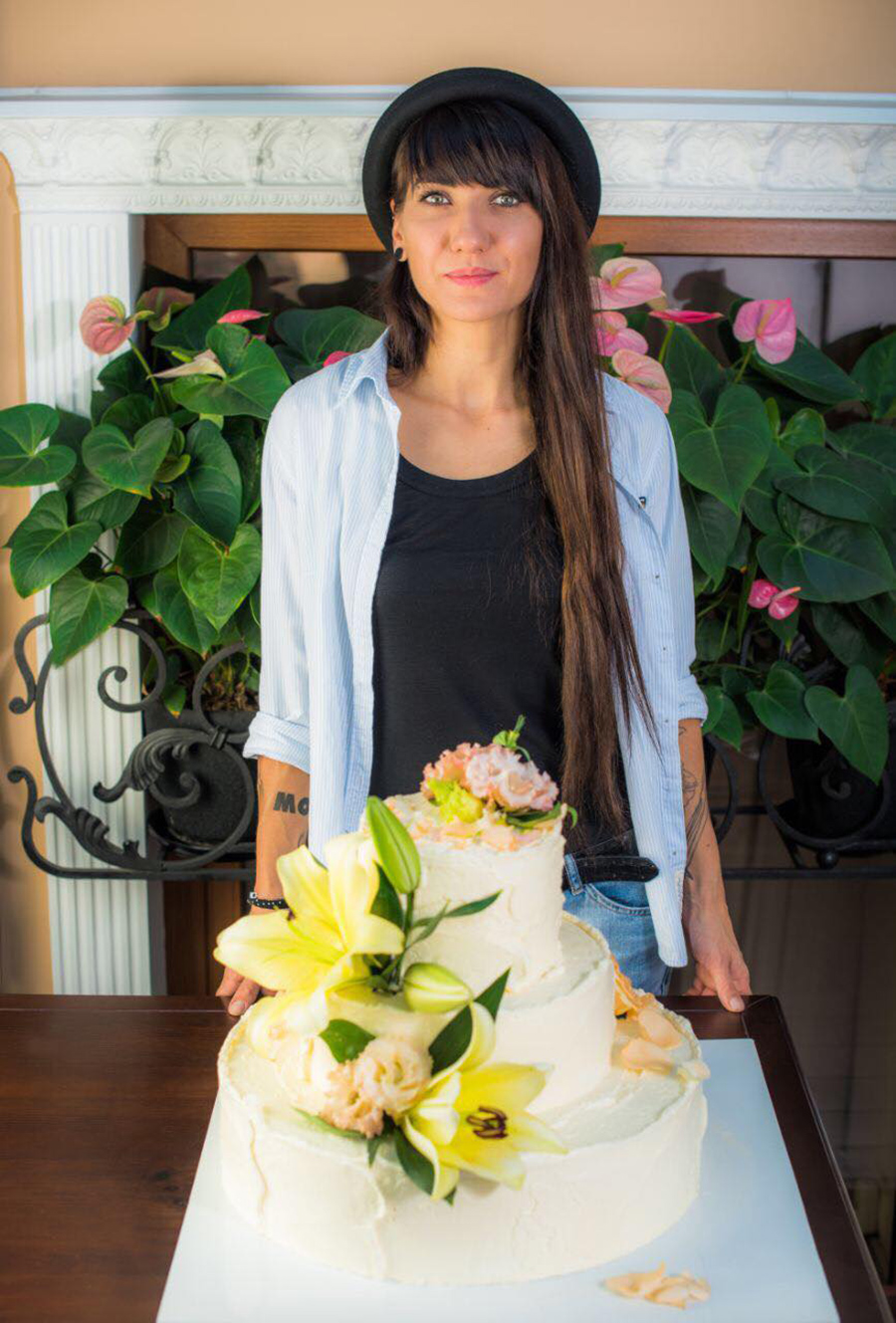 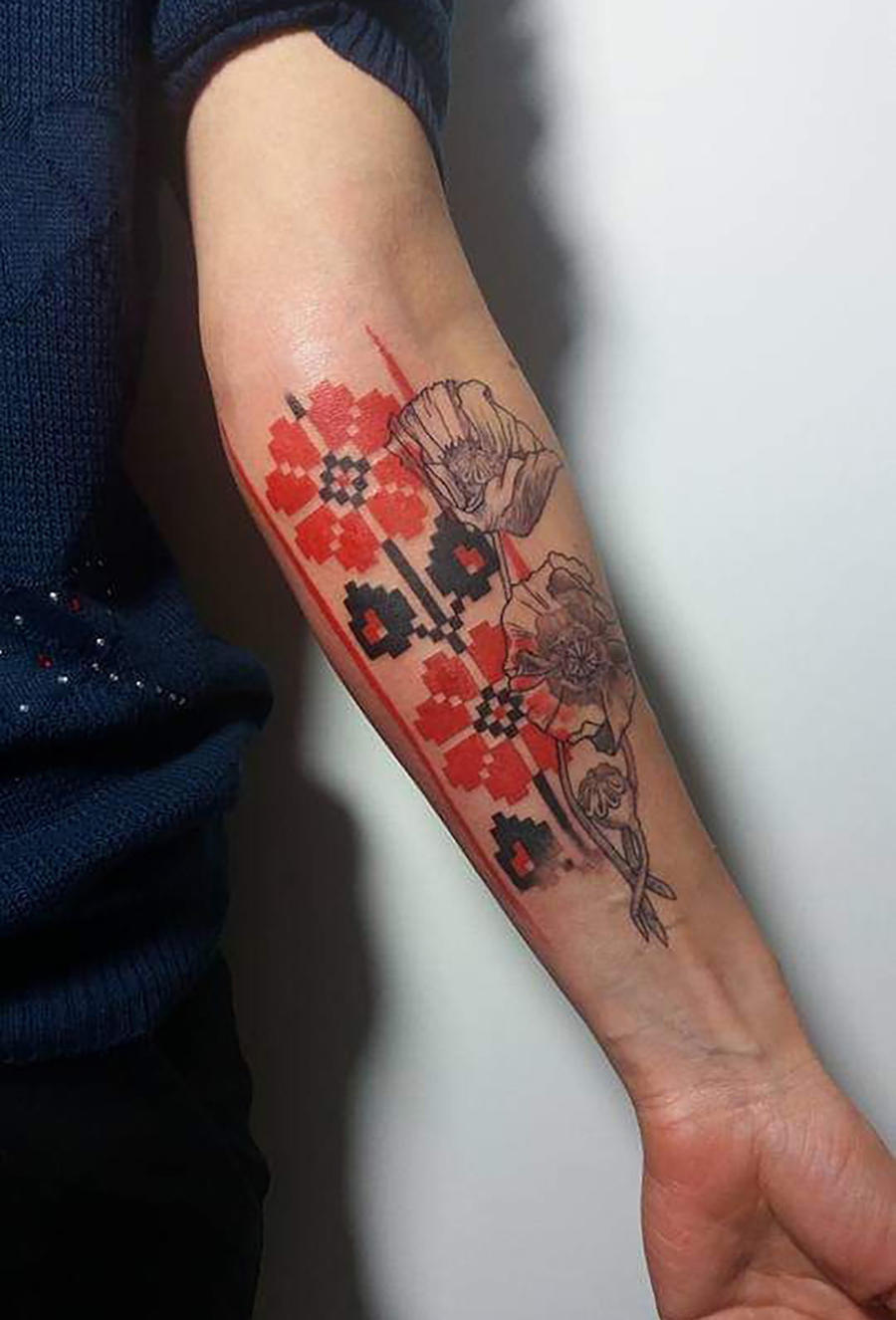 5. During the Maidan, I certainly had a patriotic upsurge, but then there was no desire to get a tattoo, as I didn’t have them at all then. I made her first at 30 and embroidered at 3. It was 2015 and there was already a war. More influenced by the fact that many people in our city and in our country, suddenly began to talk about the fact that they are not Ukrainians and shy of their nationality and their country, look for some roots, as we are not ukrainians. And the Army is not like that and the policy is wrong, and all that. But the country is first of all people. This was my little protest. That I am ukrainian and, neither politicians, nor the situation in the country, nor any errors of the ancestors will make me refuse from this. I often see the looks on my tattoo, it does not bother me, I proudly wear it.

6. Ukraine may be different and will be. I understand that it will not be soon, because it is necessary to educate a new generation, we were brought up by Soviet time and it will not be knocked out, especially by people who are older. I believe in a bright future, I believe in young, thinking people and in our children.


2. On the left foot is a red and black embroidery pattern. It was made literally on the tenth day after the 21st birthday.
3. The idea was born a long time. First came the idea of ​​tattoo. There were many options in my head, and a year after the plan everything crystallized into a desire to do something that would be relevant all my life, which I would not regret, something with character. So there was embroidery. 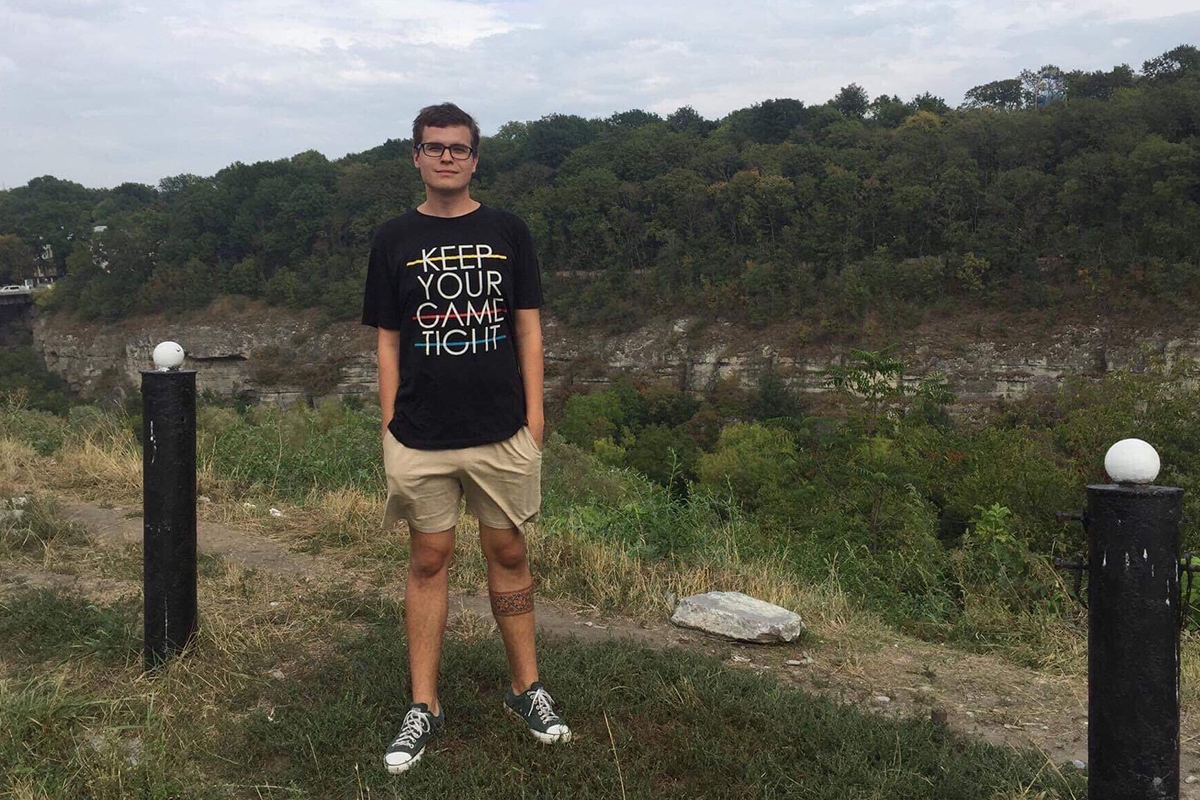 4. Vyshivanka was in childhood, mother embroidered. There is no adult now. But I plan to somehow buy.
5. In general, I was just at the time of the Revolution of Dignity, thinking about a tattoo and these events helped to determine the final version. Already in February 2014, I knew exactly what I wanted to fill.
6. I see the future of Ukraine successful. A generation of my peers will come to power who care about the country. A generation that will love their land, do not think exclusively about their own interests. And then Ukraine will be rich and successful. This will inevitably happen.


2. The first tattoo was filled in the first year - this is the emblem of Ukraine. It was made on the Maidan, exactly when there was “Maidan”: three more of my classmates made tattoos with me, because it was on the Maidan that the guy from our university died. Each one has a tattoo on his left arm.
3. Six months later I filled an embroidery coat around the coat of arms. A year ago, I stuffed a crying woman in a wolf's cap on my shoulder, which means that if Ukraine had not been humiliated and robbed, she would not give up. Around the wolf there is a line with 27 points, symbolizing 24 regions of Ukraine, the Autonomous Republic of Crimea and the cities of Kiev and Sevastopol. Many people ask me why I did it, they say, the government will change, you will delete it. But I am sure that everything is inside each of us: who is a patriot of his country? I am a patriot, my homeland is not only where I live or was born, it’s all of Ukraine. A tattoo is all moments of life, and all the most important is inside. 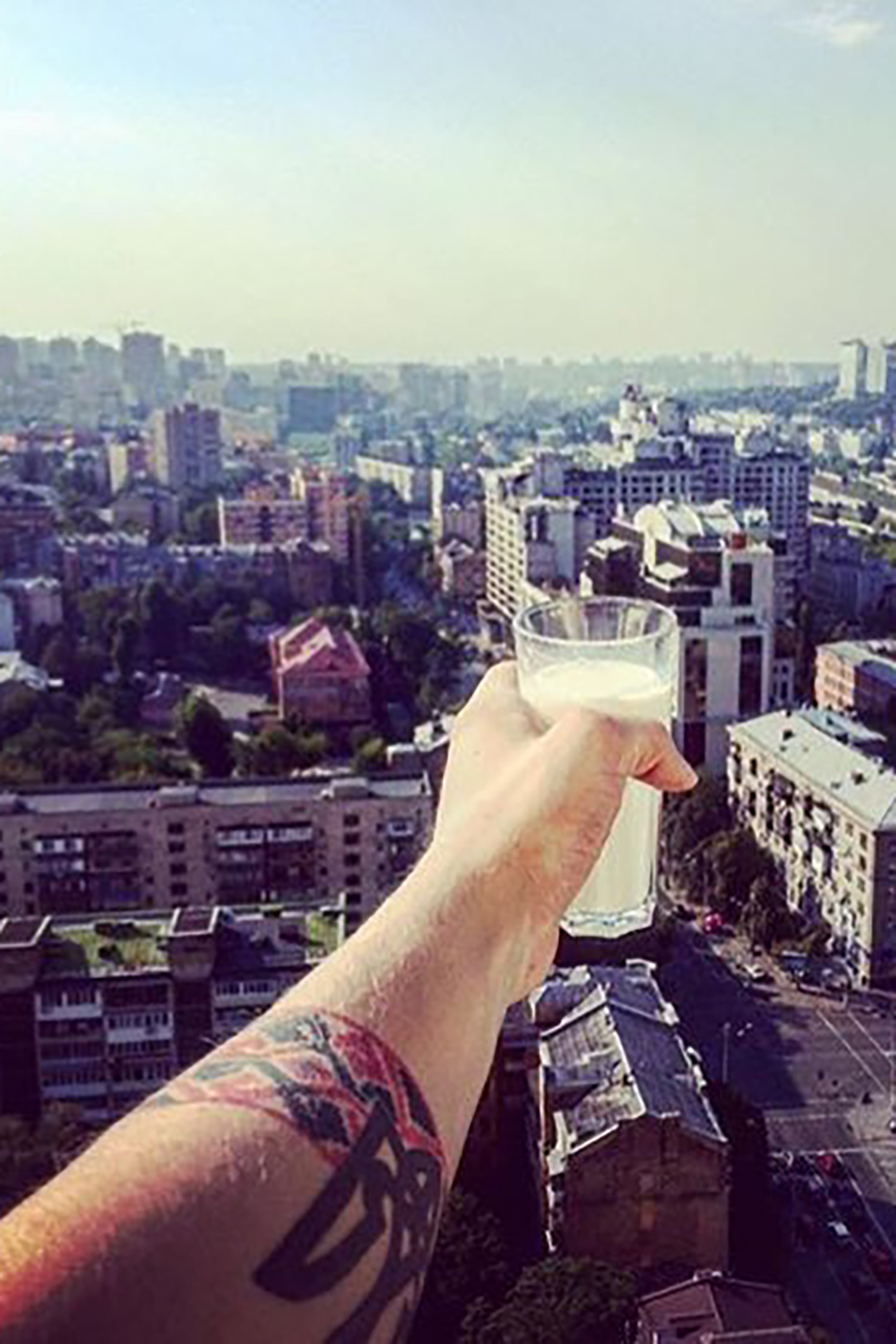 4. Yes, I have an embroidered shirt, I used to wear it, now - less often.
5. As you can see, Independence influenced.
6. Everything will be fine, I'm sure. It is just necessary that everyone wants at least some future there: starting with a person from some village that doesn’t even have much opportunity to change something, to a person with great potential. Everyone should invest something, not steal it: only then will we get a happy future for Ukraine.


2. Embroidery on the sleeve of the left hand. Made in 31 years.
3. I am a musician of the Ukrainian rock band. Any element of self-identification is important for me in life. I always dreamed of an aesthetic tattoo that would not be annoying for years and would correspond to the nature of my work. I wanted original and exclusive embroidery, because this is one of the things that, in my opinion, will never bother me. Found a beautiful pattern on the Internet and redid a little to your taste. 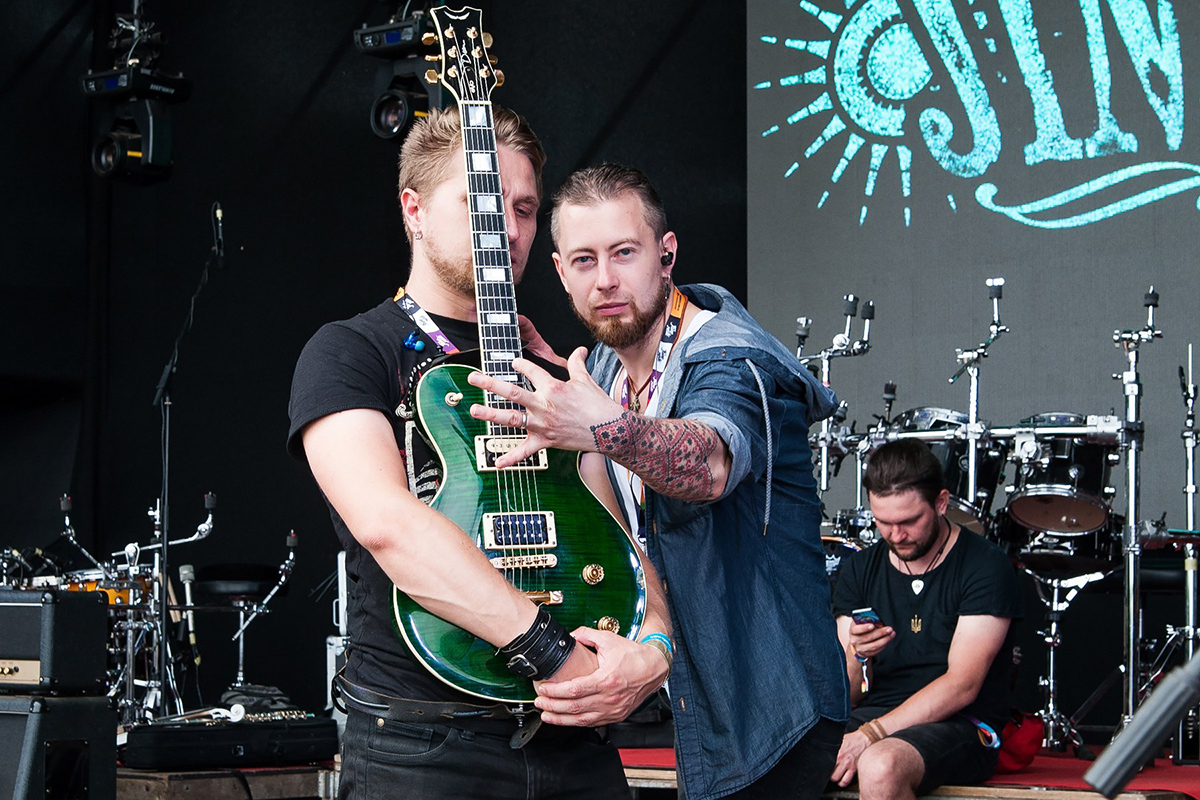 4. Embroidery is. And not one. I dress for holidays, performances.
5. The Maidan is not in any way an idea to get a tattoo.
6. I see the future of Ukraine in direct proportion to the people who build it.


3. Independence did not affect the tattoo, because then I got eyes on my knees, fire. 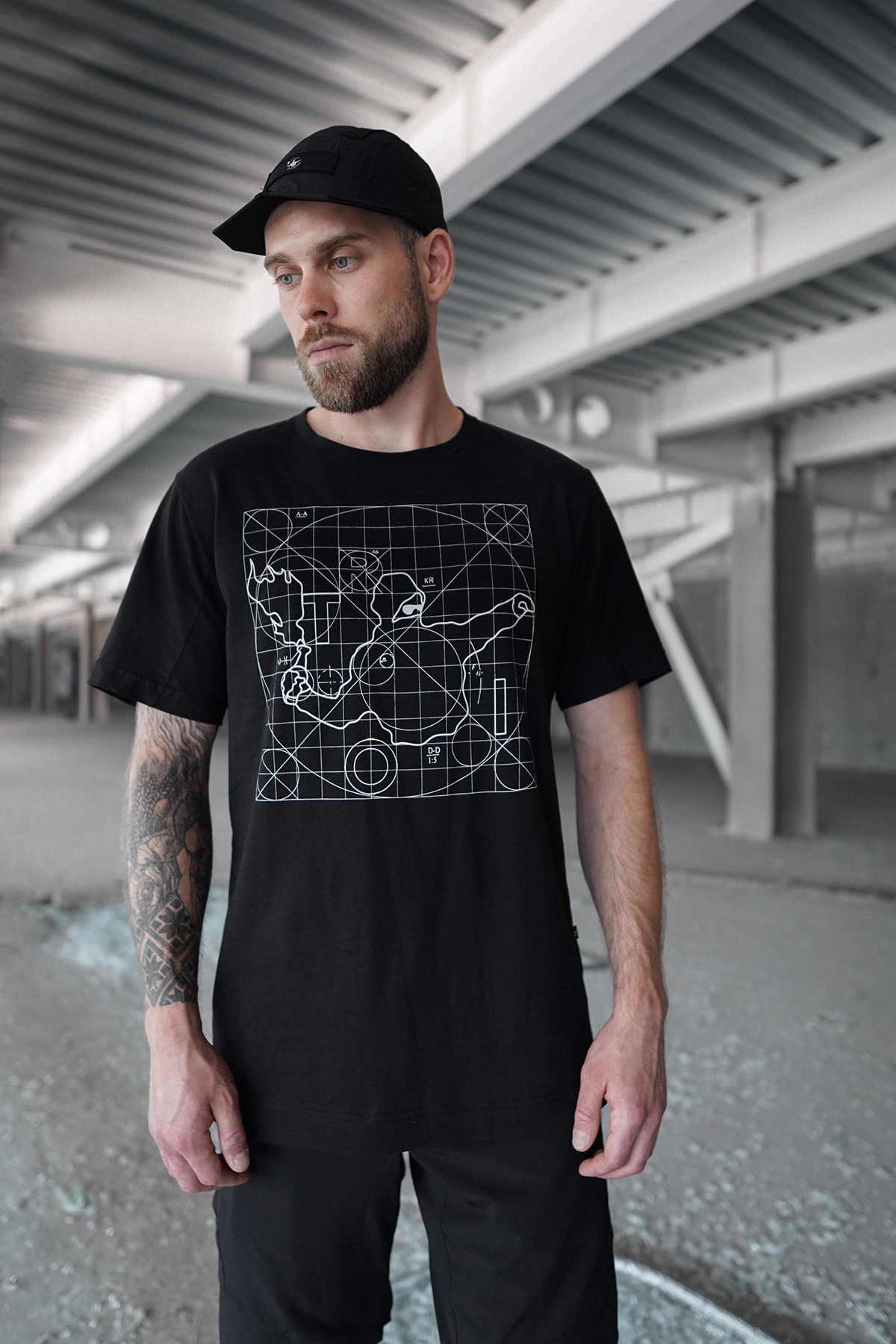 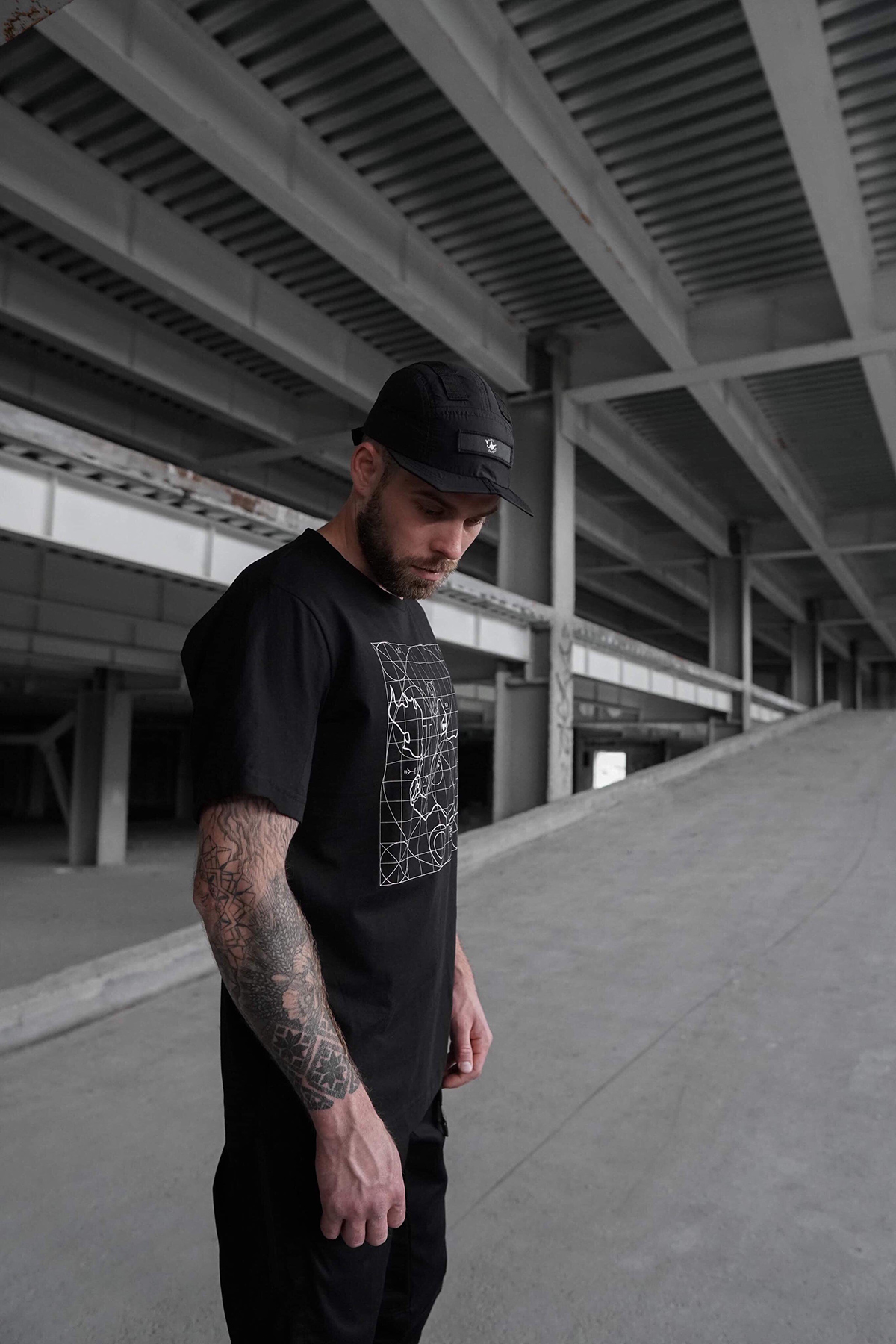 
2-3. On the hand there is a Ukrainian pattern - an art element from the works of the Ukrainian artist Zinaida. I really liked her vision of Ukrainian patterns. I always wanted something Ukrainian, and when we started to be friends with Zinaida, I found what I was looking for! 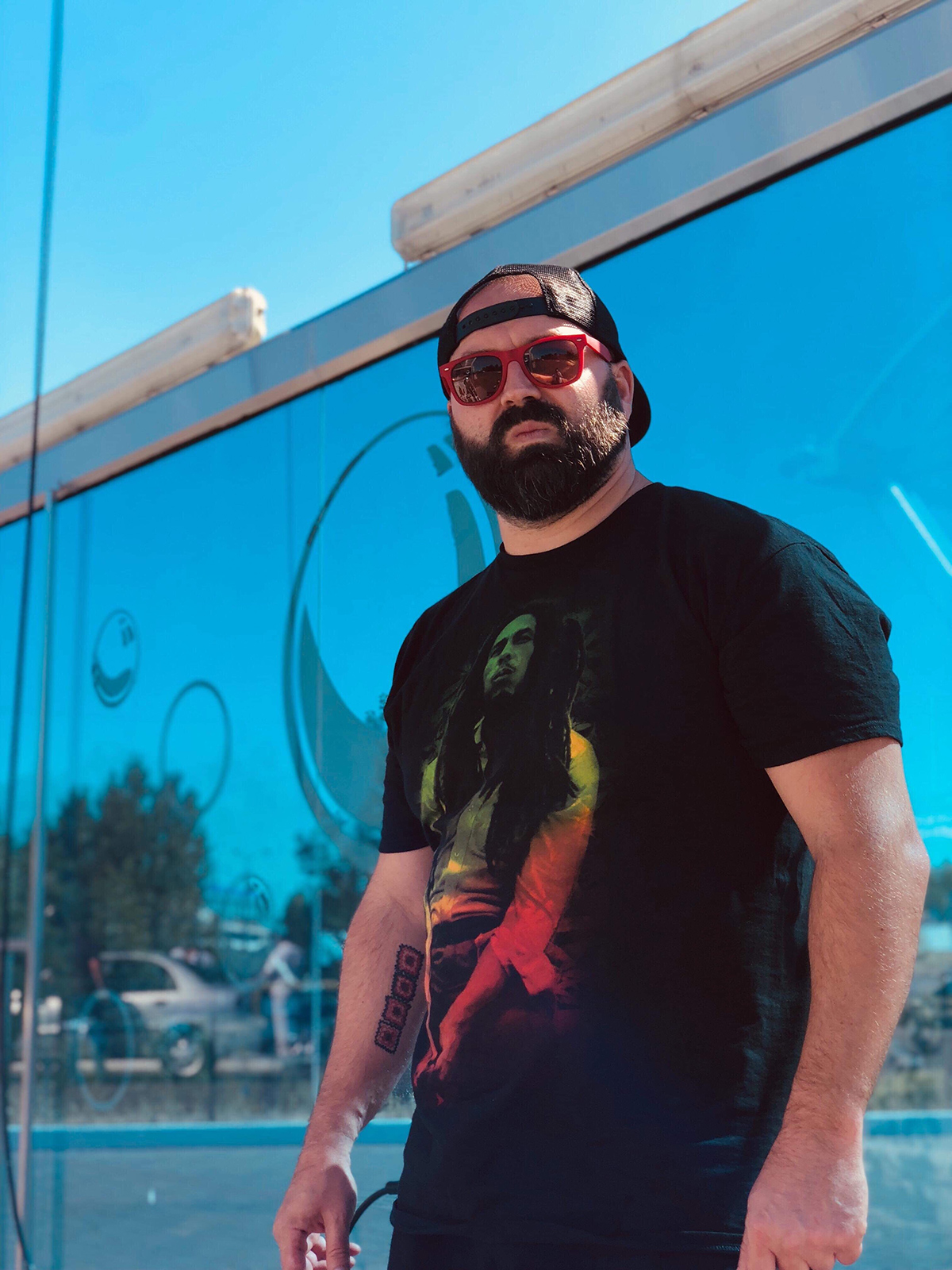 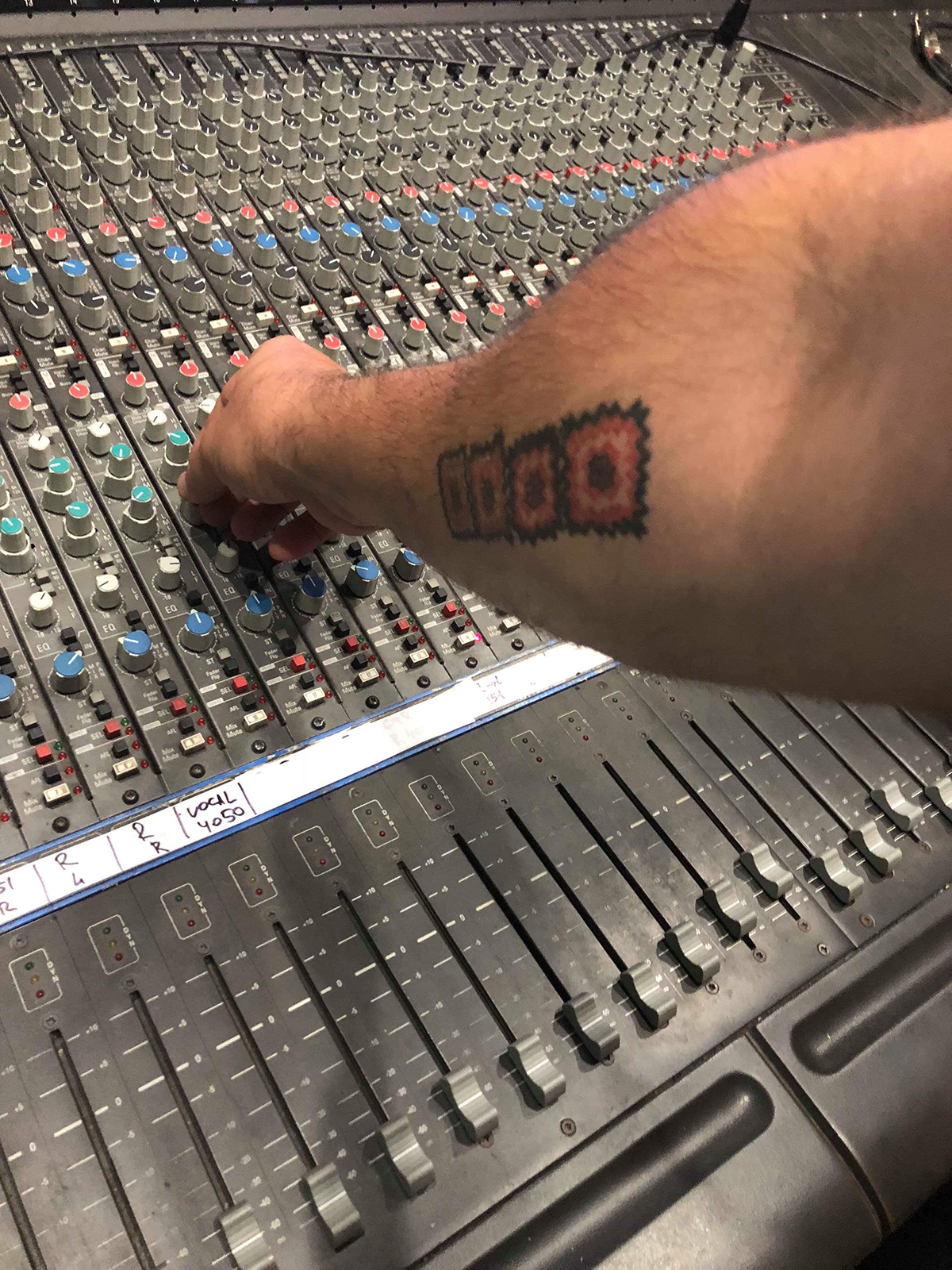 4. I have a shirt, I wear at home when I am in a mood.
5. Independence did not affect the idea of ​​a tattoo, it was all up to the square.
6. I see the future of Ukraine as the present, only with elements of new technologies. The standard of living and consciousness will not change in the majority of people. 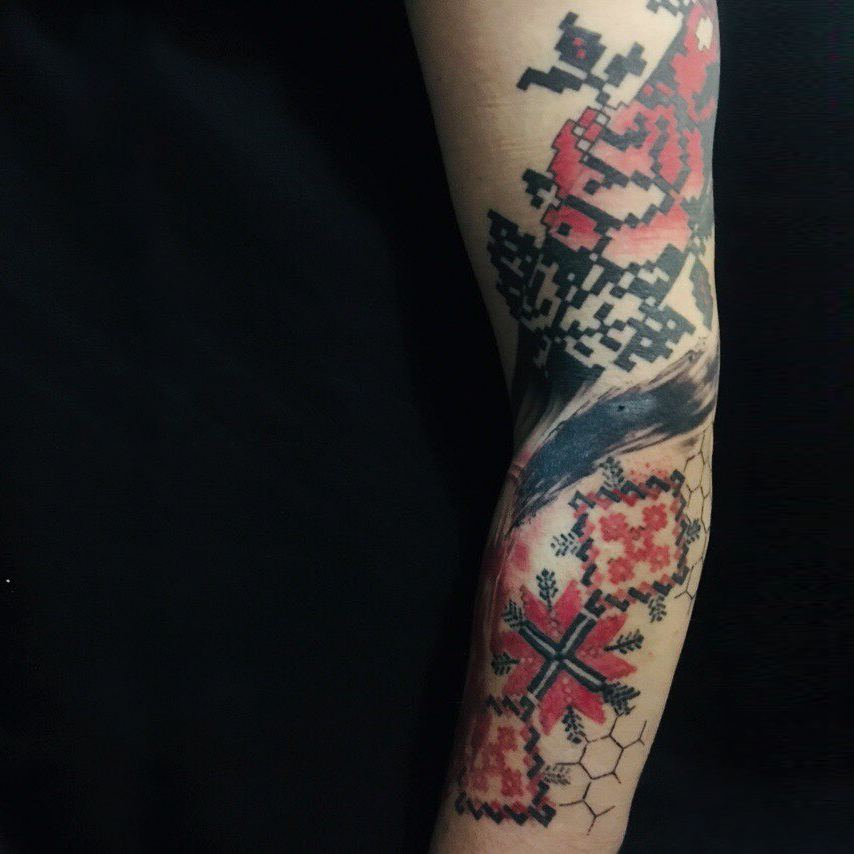 4. Embroidery is, I wear often.
5. Yes, Independence influenced the desire to get a tattoo.
6. Ukrainians live in peace and harmony, preach Love, everyone is happy and joyful.

Evaluating the answers, it can be understood that the motivation of people was diverse. Sometimes it can be just a pattern that you like, sometimes - a mention of something important. But one thing is for sure: even in this way, people acquaint others with the cultural achievements of Ukraine. 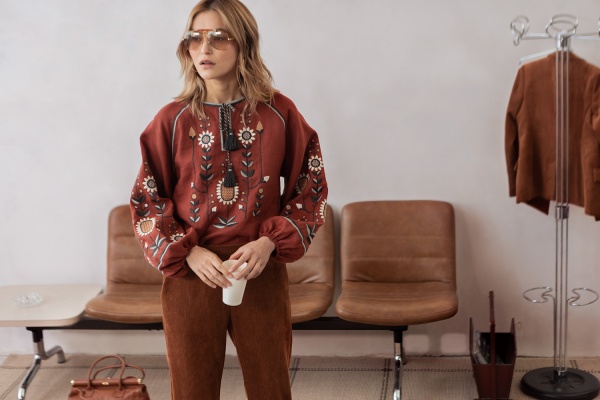 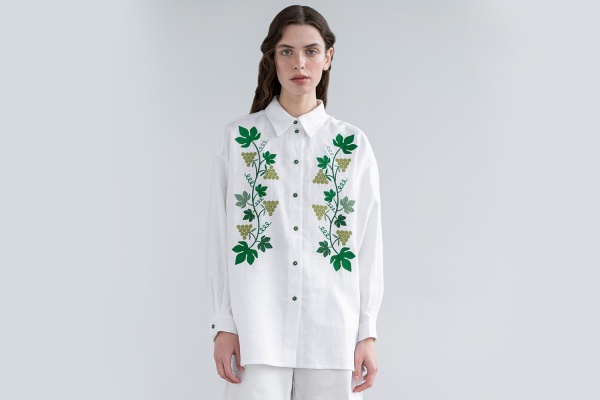